Are all allergies alike? 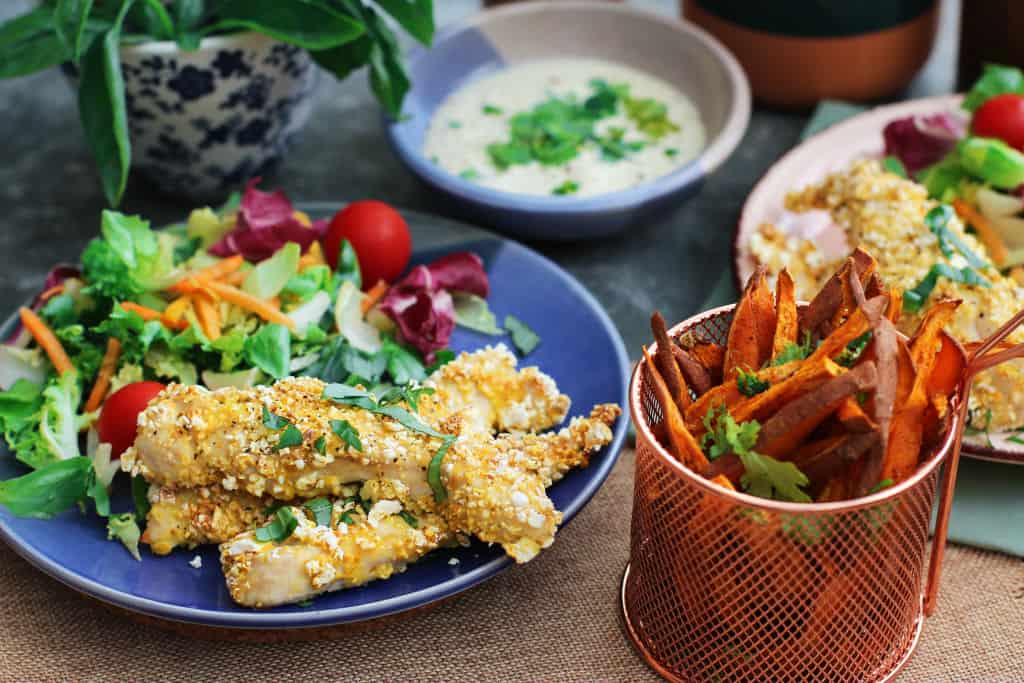 28 Feb Are all allergies alike?

Look at this picture: after eating those Egg McMuffins, your son always gets these red, ugly and itchy patches on his skin. At the same time, your 3-month old niece starts cow’s milk formula, and she ends up projectile vomiting and having green diarrhoea. And to finish things, your daughter tells you that you have to buy a gluten-free cake for her birthday party because her best friend has coeliac disease.

Yes, all these children may have a reaction to food, but… are all their reactions caused by allergies? How can you have a clue about the type of allergies your son or your niece may have?

LET’S START BY REMEMBERING WHAT AN ALLERGY IS!

Allergies are part of what we call adverse food reactions. Contrary to a toxic reaction or intolerance, in this case, your body’s immune or defense system is involved. When a child suffers from allergies, their bodies give an abnormal response after they eat certain types of food, which are normally harmless to most kids.

As we’ve discussed in previous posts, any food may trigger an allergic reaction, but only a few are responsible for the majority of cases; with most common allergens in food being cow’s milk, eggs, peanuts, tree nuts, soy, wheat, and shellfish.

You may remember as well that there are different types of allergies depending on the allergic mechanism. We’ve already talked about the IgE-mediated type, and now we will talk about those that are non IgE-mediated and those that are a mix of both.  IgE and non-IgE mediated responses are responsible for up to 40 percent of cow’s milk protein adverse reactions in infants and young children.

HOW TO RECOGNIZE A MIXED FOOD ALLERGY?

EoE is mostly triggered by milk allergens, but wheat, eggs, beef, soy, and chicken may also be involved. Vomiting, failure to thrive, dysphagia, food impaction (leading to constipation) and heartburn are the most common symptoms of eosinophilic oesophagitis in infants and toddlers (more common in males); whereas vomiting, abdominal pain and needing liquid to help swallow each mouthful, are more common in bigger kids. EoE presents with asthma, IgE mediated allergy or allergic rhinitis in 50% of cases.

Treating EoE needs close supervision by an allergist and an Accredited Dietitian as only 5% outgrow it. Management usually involves an elimination diet, which consists in avoiding foods identified by allergy testing for 4 – 12 weeks until symptoms have improved. Once symptoms have resolved, foods can be gradually reintroduced one at a time each week or second week.

You, as a parent, also play an essential role in the treatment, as you need to be aware and observe for symptoms, and the relation foods may have with their recurrence and severity. If your child suffers from EoE, it’s a great idea to keep a food and symptom diary!

AND FINALLY, THERE ARE THE NON-IGE-MEDIATED FOOD ALLERGIES 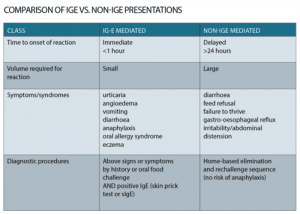 These types of disorders mostly affect the gastrointestinal tract, rather than the skin or respiratory system like IgE mediated symptoms. Non-IgE-mediated food allergies account for an unknown proportion of food allergies and include: Food protein-induced enterocolitis syndrome (FPIES), Food protein enteropathy (FPE) and Food protein-induced proctocolitis (FPIP). There are no definitive tests with skin prick tests and bloods tests being negative. Through history taking, and symptom relief when the allergen has been removed, a diagnosis is often made once the allergen is re-introduced and symptoms re-occur.

Food protein-induced enterocolitis syndrome (FPIES) frequently presents at 4-6 months of life but is usually resolved by 2 years of age. Although it is far less common than food protein-induced proctocolitis, it has been estimated that it affects one in 10,000 children less than 2 years old in Australia, according to one study.

It is more common in formula-fed infants, rather than exclusively breastfed children. The most frequent symptoms of FPIES are severe vomiting followed by lethargy and paleness, with a possibility of diarrhea occurring 4-8hrs later. Vomiting usually appears within 1 – 4 hours after exposure to the offending food.

IgE testing is usually negative although co-existance of IgE and non-IgE mediated food allergy can occur. Cow’s milk, soy protein and rice are more frequently blamed in FPIES with infants.

If your child is diagnosed with FPIES and you are breastfeeding him, you can continue nursing your baby and there’s no need to make changes in your diet. However, if you’re using a cow’s milk or a soy protein-based formula, you’ll probably have to change it. Dietitians usually prescribe an extensively hydrolyzed formula (eHF) which is usually tolerated. Feeding difficulties over time can occur in 30-40% of infants, so close monitoring with a Dietitian is important to ensure appropriate food behaviours and nutrition requirements are being met.

Food protein enteropathy (FPE) affects mostly children in the first year of life and is outgrown by 1-2 years of age. As we saw in the previous case, cow’s milk and soy protein are also the most common foods triggering the symptoms with a gradual onset within a few weeks of introduction. Symptoms include irritability, poor sleep, eczema, diarrhoea (often green & explosive), crying for long periods and failure to thrive. Treatment also involves the avoidance of the implicated foods, but in this case, if a child is being breastfed, their mother will have to avoid milk and dairy products; formula-fed babies will also need to change the infant formula to an extensively hydrolysed formula (eHF).

Food protein induced proctocolitis (FPIP) affects mostly breastfed babies in the first months of life and is outgrown by 6-9 months of age. The most common symptom here is blood and mucous stained stools with infants generally healthy and thriving in other aspects; cow’s milk is most commonly the causal allergen and should be excluded first from the maternal diet, followed by soy products, if symptoms don’t resolve by only avoiding milk. It’s expected to see an improvement after 3 or 4 days following this diet; however, if symptoms don’t completely resolve within 2 weeks soy and egg should be excluded too.

WHAT ELSE SHOULD I KNOW?

There are other non-IgE immune-mediated food reactions that affect the small intestine, including coeliac disease and gluten sensitivity, two increasingly recognized disorders.

Although there is no definitive treatment for any of these types of non-IgE mediated food allergy syndromes, the avoidance of gluten is the standard of care.

It’s important to identify allergies in children early, as it will improve their quality of life, their growth and help to prevent or worsen fussy eating or behavioural issues related to food later in life. There is a lot of information out there on food substitutes when there is a food allergen that needs to be avoided.  It is important to be followed by a Dietitian to ensure the right substitutes are given, however, this is one great site written by Dietitians on some of the common food allergies for some preliminary information.

Because fatal and near-fatal food allergy reactions can occur at school or other places outside the home, parents of a child with food allergies need to make sure that their child’s school or daycare has a written emergency action plan. The plan should provide instructions on preventing, recognizing and managing food allergies.

Sorry, the comment form is closed at this time.

🤱🏼WHAT CAN INCREASE & DECREASE YOUR MILK SUP

Let’s help our fellow pregnant mammas out and co

🤔Your baby didn’t eat the food you tried to g

👶🏼When preparing for a baby, there’s so mu

⭐The beginning of your pregnancy journey can oft

🍎 How much fruit and veg should my toddler be e